Take a stroll along the streets of Tel Aviv and you will find our road names filled with rich history from the individuals they were named after. So let’s take a walk around our the urban core of our neighbourhood and explore the history and vibrancy of the streets!

Exiting the door of the Sea Executive Suites with the amazing sea view on your right, take a left onto Trumpeldor St and walk straight for a block where you will hit Ben Yehuda St!

Ben Yehuda St was named after Eliezer Ben-Yehuda, the father of Modern Hebrew. In a time where Hebrew had not been the spoken language of the Jewish people since the time of the Bible, Ben-Yehuda managed to accomplish a near impossible feat and transformed Hebrew into a modern spoken language. He believed that the revival of the Hebrew language would be instrumental in uniting all the Jews in the world.

Tired after a long day of shopping or just needing something to cool off from an afternoon at the beach? Refresh yourself with a yogurt topped with fresh fruits at the Tamara Yogurt!

Enjoying the country and want to bring some gifts to share with your friends & loved ones back home? Check out the many tiny stores selling Judaica souvenirs (Jewish themed souvenirs) along Ben Yehuda! From Shabbat candleholders to challah knives, you will be spoilt for choices!

After hitting Ben Yehuda from the hotel, make a left turn and continue down on the street and you will reach Bograshov St.

Bograshov St was named after Haim Boger (Bograshov). Elected in 1921 to serve as a representative to the Tel Aviv City Council and the Assembly of Representatives, he established the Nordic district in Tel Aviv for Jews who had been left homeless.

In recognition of his contribution, the main thoroughfare crossing the Nordic district was named after him while he has alive. Interestingly, Bograshov being a modest man changed his name to Boger after that!

The nexus between the beach and the city, Bugrashov St offers on one end the warm sandy beach with the Mediterranean Sea view and on the other end, the air-conditioned shopping mall – Dizengoff centre! Along the way, you may also find quaint restaurants and small shops selling clothes!

Looking for French chic apparels at affordable prices? Pop by Mel Boutique where their clothes selection are carefully handpicked to match the current trending urban fashion!

If we continue walking along Ben Yehuda St, past Frishman & Gordon St, we will hit Ben Gurion Boulevard.

Ben Gurion St was named after David Ben-Gurion, also known as the founding father of Israel. On 14th May 1948, he formally proclaimed the establishment of the state of Israel and served as the nation’s first Prime Minister and Minister of Defense.

With shaded trees lining the street, Ben Gurion St is one of the nicest places to take a stroll down with a cup of coffee and explore the city. With a wide variety of coffees and small outdoor cafes, there are many places that give you the opportunity to relax to the aroma of freshly brewed coffees and enjoy the Tel Aviv weather. Of course, beyond cafes and eateries, there are also quite a few establishments along the boulevard that are worth visiting.

The former residence of Israel’s first prime minister, the modest house was transformed into a museum. It is uniquely designed to reflect the simple lifestyle of its former residents but consists an impressive library that contains thousands of books.

And there you have it! Welcome to our little neighbourhood, where rich history and amazing activities collide! 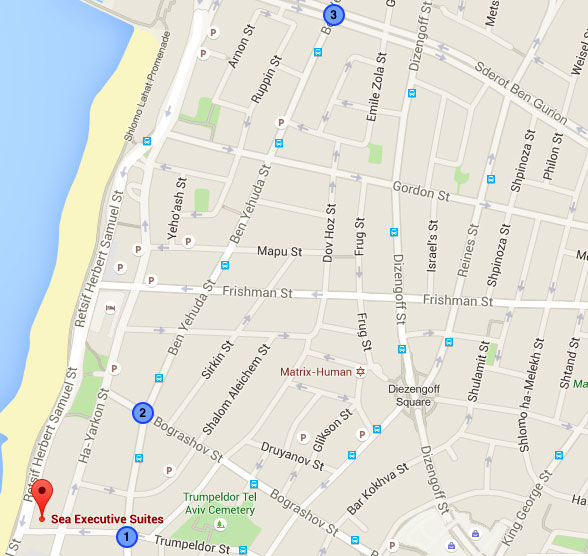